Warning: A non-numeric value encountered in /home/pilgrim/public_html/wp-content/themes/Divi/functions.php on line 5759

What are my rights as a human being? What should I expect my government to provide me with and what is my responsibility?
These are challenging questions that lie at the heart of most of the seemingly complex issues that face individuals, nations and inhabitants on planet earth. Yoga can help us navigate these challenging issues.
Yoga philosophy is rooted in the concepts of truthfulness, non-harming, compassion and empathy. At the heart of these teachings is a core respect for the tremendous value of each human life.
I help to organize a yearly yoga festival that celebrates the ideals of the United Nations. 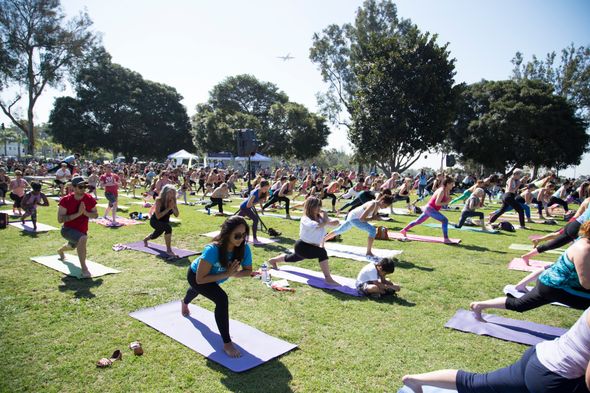 These ideals are rooted in yoga. The United Nations honors June 21st of every year as the International Day of Yoga.
An example of yoga taking form in our modern world can be found in the Universal Declaration of Human Rights (UDHR), which was adopted by the United Nations General Assembly on 10 December 1948. This declaration was created to complement the United Nations Charter by creating a road map to guarantee the rights of every individual on the planet.
The Commission on Human Rights, which was tasked with the creation of the UDHR, was made up of 18 members from various political, cultural and religious backgrounds. Eleanor Roosevelt, widow of American President Franklin D. Roosevelt, chaired the drafting committee.
The entire document is readily available online. The UDHR provides fundamental ideas and principles that, if valued and honored, would profoundly help individuals and leaders make decisive and clear choices regarding issues we currently face.

Health Care as a Human Right

Let’s take the issue of health care.
Our current system is not meeting the simple and straightforward goal stated in Article 25 of the UDHR: “Everyone has the right to a standard of living adequate for the health and well-being of himself and of his family, including food, clothing, housing and medical care…”
Let’s apply this universal human right to those living in the United States by asking a few questions about the standard of living and healthcare in the United States. Does our nation value the goal of everyone having the right to adequate health and well-being? Does our government put energy and resources towards these goals? Is our national intelligence applied towards this goal?
According to the National Alliance to End Homelessness we have over 500,000 homeless in the United States. The National Center for Children in Poverty reports that over 15 million children in the United States – 21% of all children – live in families with incomes below the federal poverty threshold. Over 45 million Americans live below the poverty level. Over 30 million Americans have no health insurance.
We spend over 600 billion dollars a year on war. We spend more on our war machine than the next 8 countries combined. Are we creating something of value for humanity or perpetuating a mentality that is doomed to failure?
Mikhail Gorbachev, who was instrumental in the ending of the Cold War and the human rights that its end brought to hundreds of millions of people wrote, “The time has come to choose a new direction of global development, to opt for a new civilization.”
That new direction means reaching towards goals that serve the well-being of humanity and the rights of each human life. What is the benefit of another nuclear warhead? What is the value of a child going to sleep feeling safe and secure?
Yoga gives us each the opportunity to expand truthfulness, non-harming, compassion and empathy within our own hearts. These emotions and feelings will then give rise to actions that can begin a wave of change.
What can one person do? What steps to take? If you ignite the fire of your determination to move towards change the universe will provide you an opportunity to help with creating a new direction. Guaranteed!

Sujantra McKeever is the founder of Pilgrimage of the Heart Yoga in San Diego, which serves over 1,000 yogis a week, and also helped create Pilgrimage Yoga Online. He is the author of five books on eastern philosophy, success and meditation. Sujantra studied meditation with spiritual teacher Sri Chinmoy and has lectured on meditation and yoga in over 30 countries.

Get full access to our 300+ online yoga and meditation classes to deepen your home practice. Pay as you wish, FREE is an option.

Motivation To Start Yoga: 5 Steps to Bring Yoga into your Life Every Day.September 30, 2019

The Power Of Negative Thinking & How To Think Positive.September 17, 2019